Microsoft Kinect has turned out to be a really effective add-on not only for gaming but; it has given a lot of developers a platform to create really amazing technologies.


Here's a video as to whats possible with the Microsoft Kinect.

Posted by Akib Pirzade at 11:30 PM No comments:

Hybrid technologies always give the benefit of both worlds. Various kinds of aircraft designs have their advantages and disadvantages. How about an aircraft that gives the benefit of a fixed wing aircraft and a helium airship, add to that the benefit of Zero carbon emission and Solar powered operation. A Canadian Company called Solar Ship Inc. has come with such an interesting concept.

What is Solar Airship?
The Solar Ship as its called is basically a hybrid airship. Just like any other airship it has an envelope to store helium which provides with Buoyancy/ lift to some extent, although the difference here is that unlike a normal Airship which completely relies for all its lift from the helium stored in something like a balloon on top, the solar ship on the other hand relies partly on the helium and partly on the aerodynamic lift created by the wings design. The airship is designed using  Advanced aerodynamics, synthetic textile laminates that give the aircraft the ability to store helium and at the same time have enough stiffness to provide a perfect aerodynamic (aero-foil) profile to act as wings.
Under normal conditions the solar airship would rely on the aerodynamic lift provided by the wing shape to give it more than half the lift required to get them off the ground. Additionally, the aircraft could also fly when filled with plain air. What this means is the aircraft will still be able to fly and land safely if there is any accidental damage that results in helium loss. 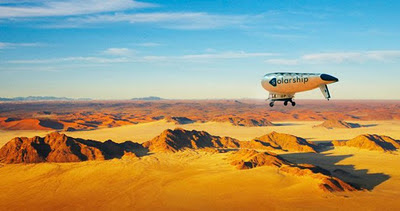 On top of the wings it has an array of highly efficient solar cells providing it with the ability to store electric energy  in batteries which can be used when required.
Read more »
Posted by Akib Pirzade at 1:13 PM No comments:

A Device that Generates Electricity from Human Respiration

With the advancement of technology in the field of medical science; The question of how to develop a better and permanent way to power electronic organ implant and organ assistance devices arises. The existing ones work on batteries so the patient has to undergo an operation every time for a battery replacement.
In recent times researchers have found ways to generate electricity from a person's blood sugar, and piezoelectric devices that generate electricity from muscle movement. Also devices that harvest energy from ambient wireless transmission waves.

Researchers from the university of Wisconsin-Madison have developed a small device that can generate electricity from human breathing. The team behind the project includes: Assistant Professor Xudong Wang, postdoctoral Researcher Chengliang Sun and graduate student Jian Shi.
Read more »
Posted by Akib Pirzade at 11:38 PM No comments: