In the developing world, electricity and other resources necessary to run clinics are difficult to achieve and many a times costly to produce. In many African countries electricity from the grid is very inconsistent and unavailable in rural parts. So medical centres and clinics in these areas rely on Diesel generators or Photovoltaic solar cells for power, now these are costly propositions and require recurring cost of fuel and maintenance. Also places in Africa that fall in the temperate regions face very cold winters and Hot water becomes a necessity. Health worker avoid washing hands as the water supply gets very cold thus creating unhygienic conditions.

A startup by the name STG (Solar Turbine Group) international established by alumni students of MIT have come up with a seemingly effective solution to the problem. The Technology is called Solar ORC and is somewhat similar to one those Concentrated solar power systems. It utilizes parabolic mirror reflectors that look like troughs. At the centre line of the these troughs lies a metal pipe which carries a HTF (Heat transfer fluid) inside. Now this HTF absorbs the heat from the concentrated sunlight and this results in raising the temperature of the HTF upto 160 degree Celsius. 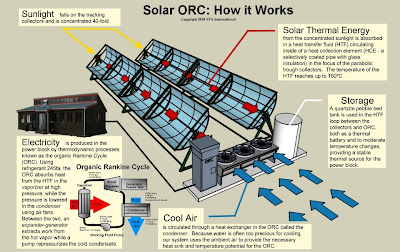 
This heated HTF now enters into an ORC unit/ORC engine, it works on an Organic Rankine cycle (Its a Rankine cycle except it works on Refrigerant rather than water as working fluid) . It works like a reversed air conditioning unit. Instead of utilizing electricity to cool the air and throw hot air outside. It actually uses the hot HTF and the cold ambient air to produces mechanical work which is converted into electricity.
The key element of the system a device called a scroll expander, which convert the heat difference into mechanical power is described in a paper to be published in the ASME Journal of Engineering for Gas Turbines and Power.
Read more »
Posted by Akib Pirzade at 6:30 PM 1 comment:

2 year old Emma suffers from a rare congenital disorder called Arthrogryposis that is characterized by multiple joint contractures (shortening and hardening of muscles) and can include muscle weakness and fibrosis. Emma was born with her legs folded up by her ears and her shoulders turned in. As a result she could not move her arms and lift things like normal 2 year olds would. 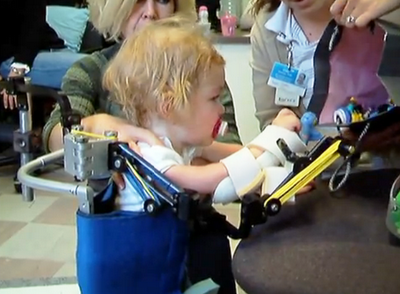 So the solution was to give her arms some external help by an exoskeleton. Researchers at a Delaware hospital 3D printed a durable custom device with the tiny, lightweight custom parts Emma needed. She calls them her “magic arms.” Now this allows her to freely move her hands around and pick up objects.
Read more »
Posted by Akib Pirzade at 11:14 PM 1 comment: