Lewis Hamilton burns some rubber on the streets of Mumbai.

Formula 1 McLaren driver Lewis Hamilton was in Mumbai this past Sunday night at Bandra-Kurla Complex. The run up was flagged off by Maharashtra Chief Minister Prithviraj Chavan in the presence of Public Works Department and Tourism Minister Chhagan Bhujbal, among other dignitaries.

With the Singapore Grand Prix just a week ahead, Lewis Hamilton made this skilful burnout in the  Vodafone McLaren Mercedes MP4-27 race car. Lewis Hamilton told that he is really looking forward for the Indian Grand Prix scheduled on 26-28 October later this year.

My cousin brother Rahil was able to capture the run up and burnout up close. Probably the best amateur footage available on YouTube.

DARPA in collaboration with Boston Dynamics has been brewing up some really awesome legged robot technology over the past few years. The various legged robot projects have been under constant update and improvement over the years. The list of the state of the art legged robots from Boston Dynamics includes the The Big Dog, Cheetah, Petman and the latest of the pack, the LS3. Each robots have been designed for a own unique purpose and have significant differences.

The latest updates however are from the Cheetah and the LS3.
The Cheetah 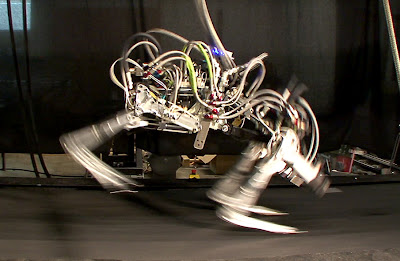 The Cheetah has been under development since 1989 under MIT and later under Boston Dynamics. It has been developed and funded under DARPA's Maximum Mobility and Manipulation (M3) program. A recent video update on YouTube shows The Cheetah running at 28.3 mph (45.5 km/h), breaking it previous record of 27.78 mph (44.7 km/h) which it achieved back in 2009. This makes it 0.5 mph faster than Usain Bolt.

Now that being said, The Cheetah has a lot of advantages over Usain Bolt, It runs on a high speed treadmill; plus, it is powered by an off board hydraulic pump and uses a boom-like device to keep it running in the center of the treadmill. Overall, significant improvements for the speeds have been made in the algorithms and a more powerful pump have been added. Although Boston Dynamics plans to test a free running Cheetah in the open environment by next year.
Not much details about the technology have been made public.