Boston Dynamics with its new toy: The PETMAN bipedal robot

Boston Dynamics is a company know for its crazy legged robots which really resemble real life movements. Its one of the leading company in the development of advance robots with remarkable mobility, agility, dexterity and speed. After releasing the video of Alpha Dog back in September, Boston dynamics released a new video demonstrating a robot that resembles an adult human in terms a lot of physical movements. 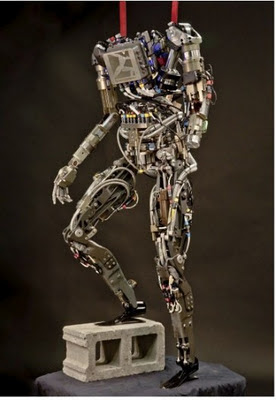 The Robot is named PETMAN which basically stands for 'Protection Ensemble Test Mannequin'. According to Boston dynamics the main reason for the development of this Humanoid robot is to be use as a suit tester; Suits designed to protect soldiers/humans against exposure to chemical warfare agents.


Obviously you cannot put a real human in a test chemical protection suit for testing and fire dangerous chemicals at them, at the same time its also really important that the test mannequin resembles the movements of a real human being so that the chemical protection suit is actually tested in really world scenario where the suite will be under constant stress due various physical motions.


In fact the suit will resemble a human to such an extent that PETMAN will simulate human physiology within the protective suit by controlling temperature, humidity and sweating when necessary, all to provide realistic test conditions.

Getting into brief specifications, the robot weighs in at about 80 kilograms (176 lbs) and has a height of approximately 1.75 meters (5.7 feet) similar to that of the dummies used for in crash tests. Boston Dynamics used motion-capture systems to study the movements of humans as they performed a variety of exercises. The robot relies on a tether that provides hydraulic power for a lot of its motions, its body comprises of many sensors and other components.

Boston dynamics has designed this robot for the US army. According to Boston dynamics, The development program has a 13 month design phase followed by a 17 month build, installation and validation phase, with delivery of the robot taking place in 2011 which seems to be really close. Boston Dynamics partnered with Midwest Research Institute (MRI), Measurement Technologies for this project. Although the Humanoid is designed to be used as a Chemical suite tester it can have a wide variety of applications.

Here is a really amazing video of how the robot actually functions.