Hey guys this is the first ever GPU unboxing review on Tech Center, I m not a PRO. at reviewing graphics cards, so please bear with me. I would like to tell you first hand that this is not a GPU review that you might find all across the internet its more of a GPU review on an old desktop computer.
My desktop computer is now over 6 years old and I really needed to upgrade it to gain some performance improvements. My desktop wasn't even able to play HD videos smoothly with the age old on-board graphics. With my tight budget, I did not go for the processor and motherboard upgrade, cause that would be like buying a new computer that would end up being only a little better than the existing one.

Keeping in mind that I would buy a new computer in like one year, I had to go for a graphics card that would not only fit my budget but; improve my existing machine and also be useful in the new computer that i plan to buy a year later. So after quite a bit of research and looking at benchmark results online I went for  the MSI Nvidia N550GTX-TI Cyclone II (1GB DDR5). 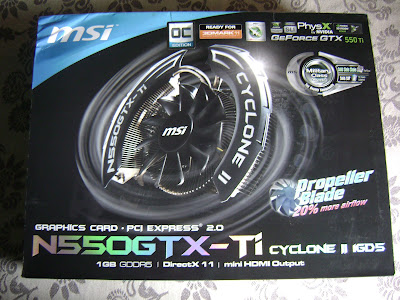 Now there are many reasons why I went for this particular graphic card. First of all its a value for money Graphics card from MSI, its based on  Military Class Concept components, so you know it can last for a lifetime if taken care. The card supports all the latest graphics technology which includes,3D Vision, CUDA, DirectX 11, PhysX. Its pre-over-clocked by MSI, as a result performs a little better than the Nvidia reference GTX 550 TI.  It has a really good active cooling system so you can always over-clock it with the simple to use MSI Afterburner software that comes with it. The card runs at low temperatures. I have never seen the core temperature go above 45 degrees Celsius.

Another major factor I went for this card is that it was fairly compatible with my existing CPU, RAM and power supply. My desktop has an Intel Pentium 4 630 processor with a clock speed of 3.0Ghz, 2GB of DDR2 RAM and a 400 Watts PSU. Let me tell you that a 400 watt power supply is sufficient enough for the GPU to run. I didn't have problems for like 40 days since I installed it, although it gave up after that, it had already survived for more than 5 years. So now I have a 550 watts PSU and its perfectly running fine.

It features 2-way SLI so i can always buy another 550 TI in a couple of years when it might become significantly cheaper and double up my GPU performance if I want to. One more major reason is the fact that i always had this dream of building a Hackintosh in the near future. I looked up and found that this card is fairly compatible for it. So I got this card for Rs. 7900/- at a shop named 'Cassette World' at Lamington Road in Mumbai. I think i got a fair deal. The card comes with a 3 year warranty.

Here is a look into What's inside the box. The packaging is pretty eye catchy, the box is defiantly worth keeping.


Overall the addition of this GPU has obviously brought significant improvements on my desktop. Now i can play games that I wanted play for years, the videos look much better. This graphics card pretty much runs most of the popular games with full HD resolution and high graphics setting smoothly. Although the latest games don't run cause of my older processor.
Infact now the processor feels under powered to play games. All in all, If you are looking to upgrade your old desktop with the intention of buying a new PC in the near future this is a very good Graphics card which you can always install in the new computer later.
Posted by Akib Pirzade at 9:42 PM