DALER: A drone that's capable of flying and crawling on the ground

Researchers at the Swiss Federal Institute of Technology have been doing some remarkable work when it comes to innovation in flying robots.
This time from the Swiss Federal Institute of Technology in Lausanne (EPFL), researchers at the Laboratory of Intelligent Systems have come up with an innovative concept of a flying platform that can not only fly but even crawl on the ground. The backronym 'DALER' stands for "Deployable Air Land Exploration Robot". Its actually named after the man behind the Project 'Ludovic Daler' a Ph.D candidate. 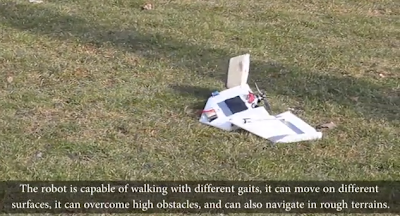 The project goes by the title 'Adaptive Morphology for Multi-Modal Locomotion' and is aimed at developing robots capable of multiple modes of locomotion. For task such as exploration, search-and-rescue, or monitoring of the environment autonomous or remotely operated robots are the obvious choice. But for these kind of tasks robots may have to deal with complex terrains, such as semi-collapsed buildings, deep caverns, or forests with a lot of vegetation. In general, flying robots are considered  most capable for the purpose. However for exploring areas close to the ground it is found that ground locomotion is more efficient than flying. Hence a robot with both capabilities is suited for the purpose.
So basically the project tries to incorporate two modes of motion into a single platform, this approach is called "Adaptive Morphology", where parts of the structure of a robot are shared between the different modes of locomotion, instead of simply adding a second locomotion structure to an existing robot. 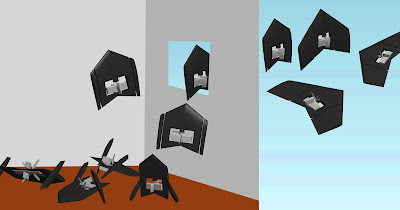 Here the flying wing platform utilizes its wings both for flying as well as for crawling/walking on the ground. These structures have been so named 'whegs'. This results in reduction in the overall weight of the air frame thus making it efficient for flying. A locking wing mechanism ensures the wing stay rigid in flight.

On ground the robot can move forward at 0.2 m/s and can rotate on spot at 25°/s. The robot is capable of walking with different gaits, it can move on different surfaces, it can overcome high obstacles, and can also navigate in rough terrains. Its still in prototype phase and expected further improve.

Check out the Prototype Video of DALER