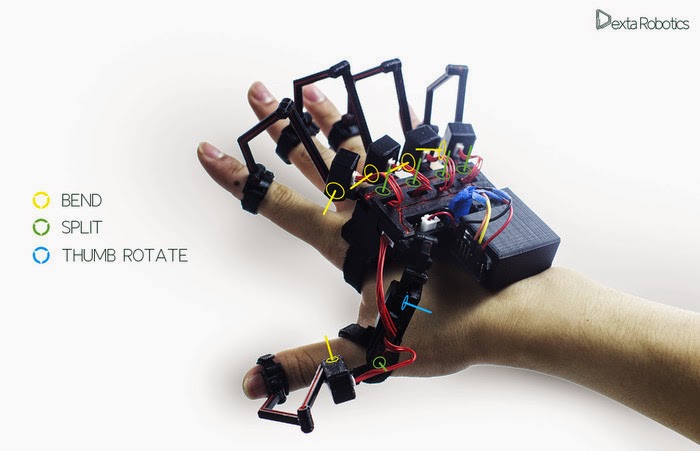 
The product will be devoloped in 2 variant, the Dexmo Classic and Dexmo F2.


The Dexmo Classic is a wearable mechanical exoskeleton that captures 11 Degrees of your hand motion. This includes the rotation of the thumb, the bending of the individual fingers, and the degree to which they split apart from one another. It also uses a single IMU (inertial measurement unit) to track the hand's movement through space on X, Y and Z axes. This is expected to be a relatively inexpensive product. 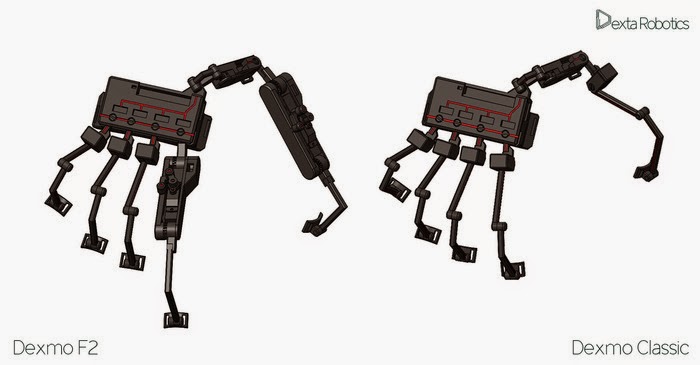 The second variant the Dexmo F2 is comparitively more advanced. It  provide you with digital force feedback (on/off only) for your index finger and thumb that allows you to feel a digital object on top of hand motion capturing. It achieves feedback by braking the joint using a patent pending technology: a miniaturized joint gear-disk braking mechanism.
When a collision is detected(either by the collision detector in a program or by a pressure sensor in real life), a signal is sent back to the device,  then the actuators activate and brake the joint, the exoskeleton locks, preventing the finger from further bending inwards, thus creating a normal force on the user’s fingertip this is achieved by using micro servo motors.

All this is achieved with no compromise to your regular hand motion.
Well the application are endless. From Gaming to Virtual Reality to Robotics. This could be used by Gamer, Doctors, Astronauts and Roboticists alike.