Ever wondered why despite having a good processor and more than sufficient RAM on your system the boot  time on your Desktop is not fast enough. Blame it on the hard drive! The standard  7200rpm HDD doesn't  read the boot data fast enough. Now you can decrease your boot time up-to 1/4 of the original by just spending around $125.

Intel has started shipping its Solid State Drive (SSD) the X25-V 40GB for $125.
No doubt the cost of SSDs is more than HDDs and thats what limited its use to performance sensitive laptops, servers and gaming machines in the  past. Although the cost of SSD is almost $3 more per GB than a standard HDD but the performance benefits are just amazing and worth the price. It comes with a 3 year warranty. The best part is it has a standard SATA interface so you can use it in your exiting PC. 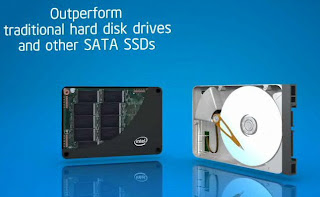 As Intel says you can use it as an add on to your exiting PC leaving your old HDD intact by using dual boot or by using the SSD as boot drive.
What that means is installing a copy of the OS of your choice, example Windows 7 on the SSD leaving your old data and OS intact on the older hard drive. 40GB of space is enough for all your OS and application needs. Its the best way to blow new life into your older machine to make it boot and load all your applications faster than ever before. Performance improvements of  up to 43 percent in overall system performance and 86 percent improvement in gaming experience have been found on test conditions via popular bench mark software.

What my point of view is, this is something which was missing. Despite the advancement  in processor and RAM technology there was no significant improvement in one of the key component the HDD. Intel has taken the right step to ensure we get the best user experience. All the money which Intel has put into developing this technology will eventually pay off.
Once SSDs starts becoming the industry standard, prices will fall.
For more info visit  http://www.intel.com/design/flash/nand/index.htm
Posted by Akib Pirzade at 11:08 PM