Last Month Garmin and Asus in collaboration launched its new smart phone,
The Garmin-Asus M10.
It features the latest Windows Mobile 6.5.3 OS. It has a sleek design a 3.5 inch WVGA screen.The 3D task manager enables users to switch between running applications. The phones sports a powerful 600Mhz Qualcomm chipset which runs the Windows Mobile OS like a breeze. 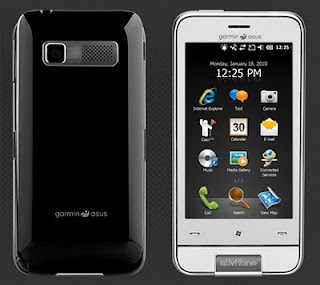 The Best Part of the phone is the navigation feature. It is similar to the Garmin Nuvi 7. Its has a highway mode that tells the driver the next upcoming street exits.
It comes with car mountings like a power cradle and a windshield mount. The Indian version has Hindi voice navigation which can be really handy and helpful to people who don't understand English or the Western accent for that matter. The OS is the legendary and ever popular Windows 6.5 so it can run most of the popular social networking and a ton of other applications. You can access/buy all the official applications via Windows Marketplace.
On the downside,The touch screen is a bit less sensitive, the camera isn't good enough it lacks popular features like auto focus, flash. But that is covered up by a great feature called Geo tags. Which means the photos taken from the camera will be Geo tagged, Describing the exact location at which the Photo was taken.
To sum it all up the M10 is decently priced at 19,990 INR (Indian Rupees) for which you get a Powerful Smart Phone and a Navigator.
So its totally worth buying it!

Check out this video review from mobile burn to know more.