This past week Australian Researchers from Bionic Vision Australia (BVA) and University of New South Wales unveiled a Prototype of a Bionic vision device which could help people with vision loss due to macular degeneration or retinitis pigmentosa.

The Device comprises of eye glasses, mounted on it is a small video camera. The camera gives its video feed to a small pocket CPU which processes it and wirelessly transfers signals to an electrode chip surgical mounted on the retina. The electrode chip has 98 electrodes which stimulates cells on the optical nerve. This enables the patient to see his surroundings 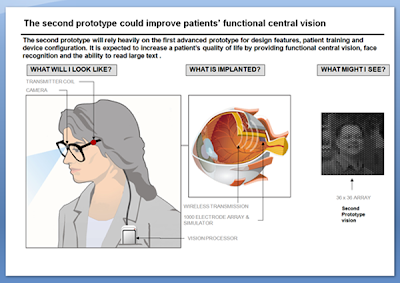 This is a breakthrough technology and can help a lot of visually impaired people. The device is just a prototype now, with more research it might just work like a real eye in the future. This technology is a result of $42million awarded to BVA in December 2009 by The Government of Australia.

Professor Penginton from BVA says that the grant, provided over four years, will take the team to the point where commercial development will be possible.

This a great hope for the millions of visually impaired people all across the world.
Posted by Akib Pirzade at 12:30 AM