Liquipel: A Nanocoating that waterproofs your Mobile device.

Since history we know that water and electronics don't get together well . A California based company called 'Liquipel' might have found the way to change that. The company claims to have found a nano-coating that wont let water affect the functioning of your electronic mobile device. The coating itself is called named 'Liquipel' . Talking briefly about the company, Liquipel is a company founded in 2011 by Danny McPhail and Kevin Bacon who are determined to protect devices around the world from water damage.

Now to basically understand this, its a nano coating finer than the width of a human hair that prevents the circuitry to come in direct contact with water, thus making the device virtually water proof. From what the company says this is achieved by a process where in the device is placed in a chamber, here vacuum is created. Then a vapor called 'Liquipel vapor' is introduced in the chamber which permeates into every corner inside out of the device. The coating is thus bonded on the entire device at a molecular level, as a result the coating should last the entire lifespan of the device. The chamber is then brought at atmospheric pressure and the device is fully functional and water proof. No need for any bulky cover whatsoever.
The coating is totally invisible to the naked eyes and doesn't interfere with the normal functioning of the device. 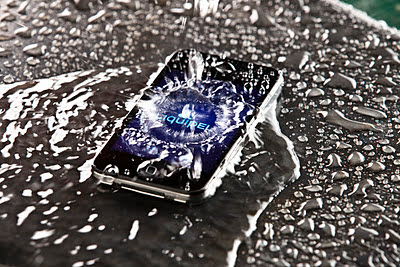 The technology seems really revolutionary and might make the electronics industry head into a totally new direction. For now this technology has been tried and tested on select smart phone devices that include the following.

- HTC Thunderbolt
- Motorola Droid X/X2
- Samsung Charge
- Apple iPhone 4s
- Apple iPhone 4
- Apple iPhone 3g/s
- HTC Evo 4G
- HTC Evo Shift 4G
- HTC MyTouch 4G
If you own any of the above devices and want to test it out, you need to shell out a minimum of $59 USD for a standard treatment that will take a couple of days. How it works is you need to send your device to the Liquipel office. They will get the device treated and ship it back to you.
Other sevices include a priority treatment for a quicker return and costs $69. There is also a treatment that claims to make the device waterproof plus it has something called 'Gadget Film' that  provides long-lasting scratch protection for the device, Its a super thin transparent film that makes the device scratch proof .

All that being said the company says that its a protective cover is only for accidental water contact and the user must not purposely expose the device to water; Like putting it in a swimming pool or take it along in a shower.
Its said, the company demoed an iPhone 4 drenched by a continually running shower-head  at CES 2012. (Some reports say they had a Tissue paper treated with Liquipel which never seemed to get went in water).
All that being said there are still a lot of questions to be answered about this "Secrete technology" and how far it really takes/goes.

Here's a demo Video of an iPhone 4 drenched in Water.

You are too late people. My dear friend Selcan has to say goodbye to her iphone in last week because of H2O.