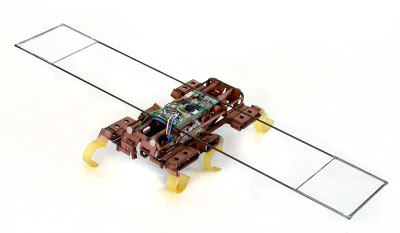 Taking about specifications and technical details. The VelociRoACH can move with a velocity of 2.7 m/s actually making it faster than a real cockroach which do a maximum 1.5 m/s.
The secret of the the velocity of the VelociroACH is in the shape of its legs. Shaped like a 'C' they provide the spring action need to propel the robot really fast and at the same time absorbing the impact of the legs hitting the ground almost 15 times a second. The legs are similar to that of the R-Hex from Bostan Dynamics but don't work in the same way. Its body has been fabricated out of a good type of cardboard. Although it can lift 4 times its own weight. It weighs a mere 30 grams and is 10 cm long. To keep it stable, it must have 3 of the six legs making contact with the ground all time.
I really did not understand the purpose of the attachment on the top but its probably for stabilization and to avoid it getting flipped.