Hypersonic Sound- the future of sound

Sound as we hear it is a disturbance which is created in the air due to a vibrating body.

Now you might be wondering what is this Hypersonic  Sound..

Hypersonic  sound is a landmark and groundbreaking invention invented by an American inventor  Woody Norris. 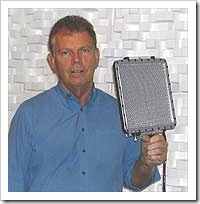 To explain it in a simple way, consider a light bulb in a dark room. When you turn on the light, naturally the whole room is light up. But when we talk about a projector or a laser for that matter we only see a focused beam of light from a source.Similarly a normal speaker creates sound and it’s audible across the whole area it reaches. Now getting back to Hypersonic sound we can say it’s similar to a beam of sound just like a laser beam! What I mean is the sound created by a Hypersonic speaker can be only heard if it is pointed towards your ears. i.e. if you come in the focus of the speaker. Isn’t it cool? If your watching T.V. with a hypersonic speaker, only the people coming in the focus of the speaker can hear the sound  everyone else around wont be able to hear any sound.
(No more fights!!)

It makes use of ultrasonic frequencies; they are very directional as their wavelength is very short.So Mr. Woody Norris figured a way to convert standard audio content to ultrasonic levels, this audio then demodulates in a certain way in the air and turns into audible sound. In a  Hypersonic  speaker there are billions of tiny speakers which create the focused sound unlike a normal speaker which just has a single speaker.

This is a very great invention and can have great applications which we can’t even imagine. Mr. Norris also created a harmless weapon called LRAD (Long Range Acoustic Device),which can emit discomforting sound to irritate the enemy and make him virtually paralyzed, without the need to injure or kill.Its alraedy in use in Iraq.This is can be very helpful in modern urban warfare. It also has  great applications in the entertainment industry. This is a new technology and its applications are still to be discovered completely.
Mr.Woody also runs a company by the name  American technology corporation