Oils spills have becomes a grave problem across the world in recent times. The major one being the Gulf of Mexico Oil spill which has posed a great threat to the surrounding ecosystem nearly destroying it. A lot of skimmers were deployed after the oil spill to clean up but they are not at all efficient as they can only collect 3% of the total oil spilled onto the sea. They are quite primitive in a sense in this high tech world of ours.

So address to such issues in future, Researchers at MIT from the Senseable City Lab have designed a system called the 'SeaSwarm'. 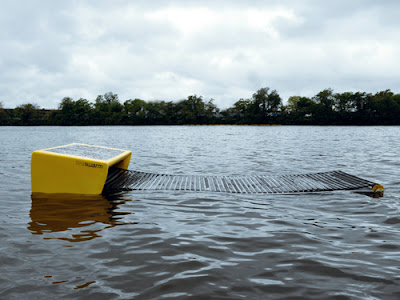 SeaSwarm is a fleet of autonomous vehicles/robot which makes it possible to clean future oil spills in a efficient and less expensive way than exiting skimming methods.

How it works?
The main thing that makes this prototype work so effectively is the use of a thin nanowire mesh fabric to absorb oil. This nano-material fabric selectively absorbs oil from water without collecting any water. The fabric can then be heated to get back oil absorbed by it. This nano fabric can be used over and over again. This fabric patented/ developed by MIT can absorb 20 times its weight in oil.

Now the fabric is mounted on a conveyor belt which is powered by a photovoltaic cell. The flexible conveyor belt  rolls softly over the ocean’s surface, absorbing oil while deflecting water.The sea swarms are designed to work in fleets and are equipped with GPS navigation and WiFi so as to work in an organized system that can work continuously without human help.

The Seaswarm robot, is 16 feet long and seven feet wide, uses two square meters of solar panels for self propulsion. And just works on 100 watts of electricity. It is carbon neutral as it uses only solar energy to work. Oil absorbed  is "digested" locally so that Seaswarm does not need to make repeated trips back to shore. Seaswarm works by detecting the edge of a spill and moving inward until it has removed the oil from one site before joining other vehicles that are still cleaning.
The team plans to reveal the Seaswarm prototype at the Venice Biennale’s Italian Pavilionon on Saturday, 28-Aug and enter it into the $1.4 million X-Prize Oil Cleanup Challenge sponsored by Wendy Schmidt.

Technologies  like this will help our future generations tackle man made environmental disasters with ease.