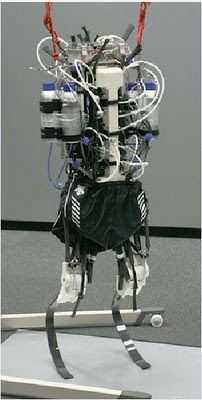 Japanese have always been a step ahead when it come to robotics. A Japanese researcher named Ryuma Niiyama developed this robot as a PhD candidate at the Department of Mechano-Informatics of the University of Tokyo with colleagues Satoshi Nishikawa and Yasuo Kuniyoshi are in an effort to build an Athlete Robot that could sprint just like a Human Sprinter. Although there are robots out there like Asimo and other Biped robots that could walk like humans but they are quite Mechanical in nature and use motors attached to reduction gearbox. The Athlete Robot on the other hand has significant similarities to its human counterpart.


The "Robot Athlete"(that's what Mr Ryuma calls it), Mimics the human musculoskeletal system. Each leg of the Robot has seven sets of artificial muscles which work as pneumatic actuators and are arranged similar to that of the Human muscles arrangement. The Robot also uses the the latest high end prosthetic blades which are used by both leg amputees in sprint events. The robot detects the body's orientation by touch sensors present on each foot and an inertial measurement unit on the torso. The robot is programmed to activate its artificial muscles with the same timing and pattern of a person's muscles during running. 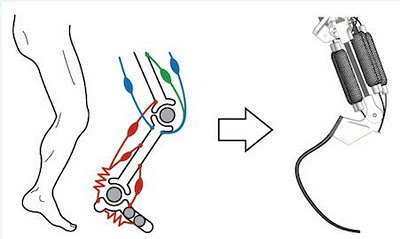 The Humanoid robot was reviled at the IEEE Humanoids 2010 conference in Nashville, USA last week. The robot is however not the kind of thing that could keep on running, its just in its prototype stage for now. It has run upto a speed of 1.2m/s and can only take up to 3-5 steps before it falls due to loss of balance.
Just like other prototypes it surely needs and requires much more R&amp;D for perfection . What we get from it is a hope for the future that Robots that move just like humans do are getting more closer to becoming a  reality then we think.

Here's a video demonstrating its running, it has striking similarities to a human sprinter.