By now most of the people across the planet who have access to the internet have tried their hands on Angry birds, if not you should try it out, its pretty engaging.
But if you are among the ones bored of the same old thing and like something thats closer to the real world then here is something really interesting you can try your hands on.

A guy named 'Simon Ford' who leads an online tools group at ARM, particularly mbed and http://mbed.org, a community website which works on enabling rapid prototyping with microcontrollers and taking DIY technology to the next level, developed a really cool device that's  a sling shot that can be actually used to play angry bird on a computer. 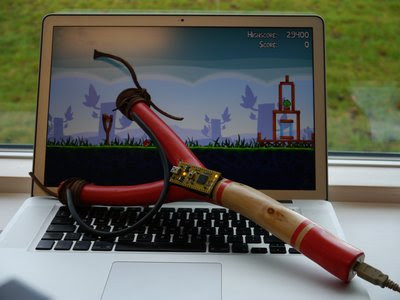 The idea for the project started off to show how easy it is to build USB devices using the new mbed NXP LPC11U24, specially designed to built USB devices.

The device has two major sensory components on the sling shot, an accelerometer to measure the tilt by tracking the gravity vector, a rubber stretch sensor to measure how much it is stretched.
The challenge here is to translate these sensor inputs and convert the real slingshot movements in to a series of different mouse movements, the game originally takes input from a mouse. All of this is done with a 'mbed NXP LPC11U24' microcontroller which basically takes inputs from the sensors and converts it into something that the computer considers as mouse inputs.
Even the Slingshot was actually fabricated for this project. At the end of the sling shot there is a USB port that you can use to interface the device with the computer.

Check out this video to see the demo of the project.

Impressed by this project? You can build your very own slingshot. All the instructions  and the program code are available here. Share your thoughts in the comments.

Source
Posted by Akib Pirzade at 12:51 AM