Fuel cell technology has been around for years now but there hasn't been any significant application of it in our real life yet. That's about to change though, a company by the  Name Horizon Fuel Cell Technologies based in Singapore has come up with an amazing portable fuel cell Charger/Power pack named "The MiniPak" which can juice up all your portable devices which require power up to 2W (5V 400mA) anywhere anytime.
For those of you who don't know, fuel cell technology produces electric current by combining Hydrogen and Oxygen molecules and the emission is just water vapor so its a green technology.
It consist of a small device which fits in your palm and a refillable solid-state hydrogen cartridge which can be removed refilled and inserted in the device like a battery. The power is delivered through a standard usb port. The cartridge is called HydroSTIK and has a battery like form factor. One fully filled Hyrostik delivers enough to last upto 3 charging cycles for smart phones and 4-6 cycles for mobile phones. The Hydrostik lasts as much as 1000 disposable AA size alkaline batteries before a replacement.The Hydrostik is 100% recyclable 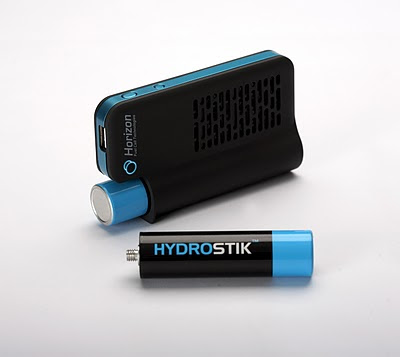 Its an amazing product which has a lot of features which are quite desirable to everybody in terms of its use and also being  Eco friendly at the same time. Its a complete off the grid solution for charging, best suited for the people who are always on the move.
It costs $99 right now which is simply amazing for such a new and innovative product, in the press release its been mentioned that the price will drop to just $29 once it is mass produced. The cartridge will cost as much as ordinary alkaline batteries and refilling will be as low as few cents. The only limitation right now is refilling the cartridge as there is no global infrastructure available for it currently. But the company says it is coming up with a new product- HydroFill "home refueling station" which could refill other fuel cell devices too.
The best part is you can order one right now
http://www.horizonfuelcell.com/store/minipak.htm
This new product might spark a revolution in technology! In the future fuel cell might be embed in our devices directly so all you have to do to get a full charge is just refill it and you are ready in a few seconds.