This is for all you engine lovers.
The Engine Technology International , published by UKIP Media &amp; Events has been organizing  The International Engine of the Year Awards since 1999 and now are considered the most prestigious in the auto industry. Here is a brief insight into the winner of the top four category winners. 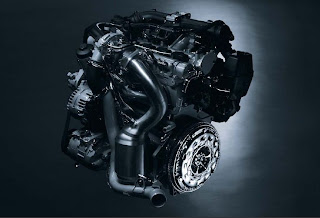 For the second consecutive year Volkswagen 1.4-litre TSI Twincharger is the winner in this category. This is an amazing engine which uses a combination of a turbocharger and  a supercharger with a direct fuel injector The first engine of its kind in history. It gives a power output of upto 125kW (170bhp) and 240Nm of torque.
(While most 1.4L engine produce around 100bhp)
As Volkswagen says "The 1.4-litre TSI engine manages to do the work of a 2.5-litre engine". That with great fuel efficiency figures of 7.2l/100km (13.9km/l). This engine proves the fact that even small engines can pack a punch whiles turning great efficiency  figures. 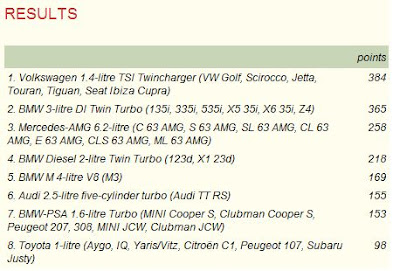 Best New Engine of 2010 (Fiat 1.4-litre MultiAir Turbo)
The award for this category was bagged by Fiat 1.4-litre MultiAir Turbo. The engine has a new and innovative electro-hydraulic valve system which directly controls the flow of air/exhaust gases and thus controlling the combustion process stroke by stroke.
The MultiAir technology results in a 10% increase in power output, 15% improvement in torque at low RPM's, 10% reduction of Fuel Consumption and CO2 emissions and result in emissions reduction ranging from 40% for Hydro Carbon / CO to 60% for NOx. Fiat calls it the Ultimate Air Management strategy for all Internal Combustion Engines. 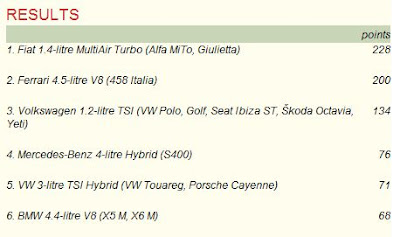 Green Engine of the Year (Toyota 1.8-litre Hybrid)
The Winner in this category is Toyota 1.8-litre Hybrid. This engine has been bagging awards for a long time in its different versions. Its ever popular I don't need to say anything further. The latest version works on the Atkinson-cycle produces 98 Horses. Its turns out fuel efficiency of 5.65 l/100km (17.7km/l). 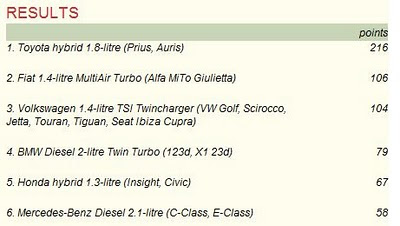 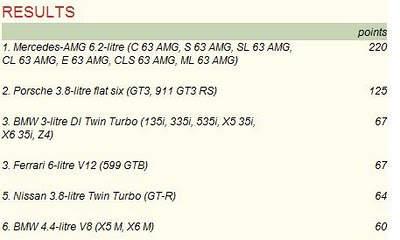 Thats some cool figures for a small engine. After learning I.C. Engines in college, most of the terms are actually making sense now. Though i still dont get what 2.5 litres in the statement "The 1.4-litre TSI engine manages to do the work of a 2.5-litre engine" stand for?