Celluon evoMouse the evolution of the computer mouse.

Since the invention of the modern personal computer the essential and most used input device the mouse has barely undergone a major design change. Although there have been a good amount of minor design changes and a wide variety of options none of them proved to be quite appealing in the market. The classic design still rules. Last year we covered a prototype project by Pranav Mistry called the Invisible mouse . It was a setup which tracked hand movement and gestures to control the cursor on the computer screen. It actually liberates you for holding a mass of plastic which is also responsible for a wide variety of wrist and hand related ailments.
If you are among the ones who were pretty amazed by the invisible mouse, I found that there is actually a piece of hardware named the 'evoMouse' which does the same. The evoMouse was unveiled at CES 2010, probably did not catch a lot of media coverage. Its from a South Korea based company called Celluon. 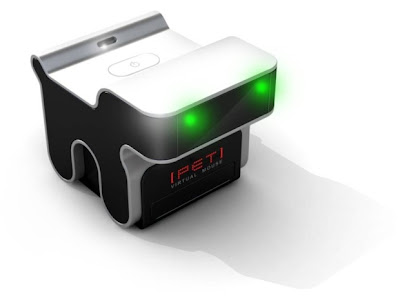 The evoMouse is a device which is designed to look like a 4 legged pet animal. It has two infrared sensors in the front which looks like eyes. These sensors basically track the user's natural finger movements to provide a full mouse functionality such as click, select, double-click, right-click, drag and drop and more over it even has multi-touch functionality which is absolutely not available in the conventional mouse such as rotate and pinch to zoom.


Features
The device can work on any flat surface. It connects via Bluetooth and also can be connected via USB, the on-board battery gets its charging via USB. Works on Windows XP/Vista and 7 also with Windows Mobile, BlackBerry and Symbian devices. The battery  life is expected to be 2 hours when working wireless. It also supports handwriting recognition. Moreover it also has an optional keymat that allows the evoMouse to be used as a portable, full-sized QWERTY keyboard. Its like a single input device which serves all your needs.

Although the company claims that, "Because it allows natural movements and doesn’t require pushing around a physical object, the evoMouse may help reduce repetitive stress injuries like Carpal Tunnel Syndrome."
I m not very sure about this as the same repetitive movement which cause the problem still remain, except that you are not moving a physical object. Although, it will give more freedom and interactivity.
The evoMouse is a truly revolutionary product but since the last year there hasn't been any update about its availability or price for that matter. I m pretty sure the device inspires major players and manufacturers to improve the concept and put it in the main stream.