Back in July 2009 NASA announced a Green Aircraft Challenge. The contest is a flight efficiency competition for an aircraft that is capable of managing average at least 100 mph on a 200 mile flight while achieving greater than 200 passenger miles per gallon. The competition is scheduled for July 2011 with an attractive prize money of  $1.65 million. Participating Team aircrafts include those propelled by gasoline, bio-diesel, hydrogen, and electricity. A German company named PC-Aero created an Aircraft that flies on electricity alone, Its named ELEKTRA ONE. 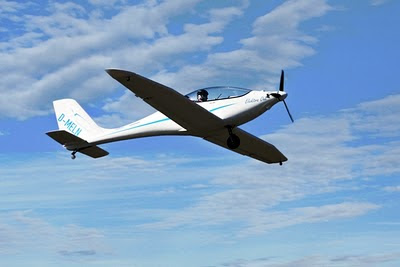 We have electric cars, bikes but an electric aircraft is something never heard off. The main reason being the heavy weight of  batteries and heavy electric motors. Elektra One weighs in at 300 kg and is powered by a 16 kW motor. The plane took its internal First Flight on Saturday, 19. Mar. 2011 at the Airport Augsburg/Germany. This First Flight was performed by the well known test pilot Jon Karkow.


Although the ELEKTRA ONE didn’t achieve the expected results for the competition but it was a maiden flight and it flew at a height of about 1600 feet, lasted for just 30 minutes. It burned just half of the 6 kWh stored up in its batteries. The composite Elektra One is part of a zero emissions flight plan. In addition to the electric aircraft, PC-Aero is promoting solar powered hangars to store the aircraft (the wingspan is just over 28 feet). Its believed that with 20 square meters of solar cells (215 sq. ft.), the Elektra one could fly 300 hours a year based on the sunlight for southern Germany.


Its most definitely its a leap in aviation technology.
Aircraft carbon emission are said to be one of the main reasons for Global Warming. If electric aircrafts can carry human beings more efficiently than jet engines then we could overcome a lot of problems related to aviation and off course, we will have  greener air travel options. This is just in a prototype stage so a lot cannot be said. Although it has proved the fact that Electric planes with zero carbon emission are more practical than previously thought.

Source
Posted by Akib Pirzade at 12:38 AM