The BlackBerry addiction has touched a lot of people in the world in recent times. BlackBerry recently unveiled a new set of BlackBerry Bold smartphones the BlackBerry Bold 9900 and 9930 smartphones. For the first time BlackBerry has a incorporated a full qwerty keyboard with a brilliant, high resolution, capacitive touch screen with "Liquid Graphics". The new phones run on The new BlackBerry OS 7 with full support for 720p HD video, built-in NFC (Near Field Communications) technology (explanation in the video below) 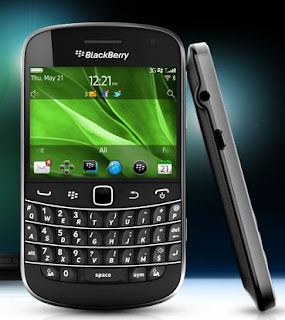 Both the phones are actually the same when to it comes to hardware and OS and build, except for the fact that 9900 is made for the GSM 4G network and 9930 for the CDMA EV-DO Rev. A and HSPA+ global roaming on GSM/UMTS networks. Talking about dimensions the phone scales at 115 x 66 x 10.5 mm, approximately weighs in at 130grams. The phone feature a 1.2 GHz Processor, with an amazing 768 MB RAM, 8 GB on-board memory, plus microSD slot supporting up to 32 GB cards and a 5.0 MP camera, supports 720p HD video recording

Other great thing about the phones is the BlackBerry Browser which has been significantly enhanced in BlackBerry 7. In addition to the performance gains of Liquid Graphics, which helps deliver faster rendering and seamless panning and zooming, the BlackBerry 7 browser includes a new JIT (just in time) JavaScript compiler to improve the load time speed of web pages. The new browser also includes support for additional HTML5 elements, such as HTML5 Video.

BlackBerry has also incorporated basic Augmented reality features. The BlackBerry Bold 9900 and 9930 smartphones feature a built-in compass (magnetometer) to support location-based services and augmented reality. APIs will allow third party developers to take advantage of the new functionality within their applications. Blackberry also says The new smartphones will also include Wikitude, which overlays contextual information on what the user sees through the smartphone's camera viewfinder which sounds pretty new for a BlackBerry device. 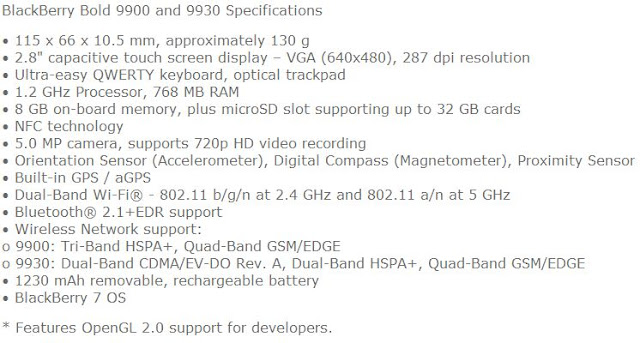 RIM says The new BlackBerry Bold 9900 and 9930 smartphones are expected to be available from carriers around the world beginning this summer. No words on the pricing yet.
Here is a video about Near Field Communications


For more
Source
Posted by Akib Pirzade at 11:00 AM