Small form factor computer have really becoming popular in recent times. Xi3 a company renowned for its modular & small form factor PCs recently announced a Google Chrome OS based desktop. If you don't know, Google Chrome OS is a cloud based OS from Google. This would be the worlds first desktop PC based on the Chrome OS. To give you a brief idea Xi3 Modular Computer was first unveiled in 2010. It was then publicly unveiled at CES 2011 earlier this year where Xi3 was declared a winner for Innovations Award in the Computer Hardware category. 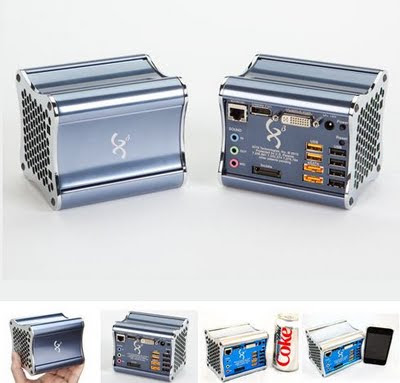 The reason these systems are called 'modular' is the fact that Unlike traditional computers, the Xi3 Computer Architecture makes it possible to change the functionality of a Xi3 Modular Computer, including the Chromium PC. All it takes is swapping some easily changeable hardware and boom the device can be turned into a small server and a work station on another day. Like its modular siblings which run on Linux and Windows OS and are available to buy right now, The Chromium PC contains three interconnected boards which together form what can otherwise be thought of as a motherboard. Whats more interesting is the fact that these modules are scalable. They can be linked together in chains for high processing and hardware needs.

The Chromium PC will be powered by AMD dual or single-core 64-bit, x86-based processor, housed in a chassis measuring 4.0- x 3.656- x 3.656-inches and will be available in multiple colors and choices. The power draw of the system is said to as low as 20 watts. ChromiumPC pricing will be announced later this year, with additional specifications announced at that time. General availability for the ChromiumPC is expected in the second half of 2011. The release date has been slated to be on 4 July 2011.

Whats amazing is the fact that unlike the notebook/netbook solutions announced by Samsung and Acer earlier in the month where you don't have the freedom to add or use another OS on the system, The ChromiumPC gives you all the freedom. You can just swap out one of the three boards inside the ChromiumPC and make it run any other OS of your choice.

This video will help you understand what a Xi3 modular PC actually is.