Internal Combustion engines have been driving the world around for the last 100+ years. They are widely used because of their of their rugged construction and reliability to work in any condition, they still rule the world but, they are polluting and hence don’t seem to have a great future cause of the threat of global warming facing our planet. As a result a lot of companies are trying to refine the engine and develop new technologies.   Lotus Engineering has come up with a type of engine called the “Omnivore engine”. Lotus reviled the engine concept at the Geneva Motor show earlier this year. Now they seem to be running test trials and test show that the Engine achieves 10% better fuel economy compared to direct injection engines, with ultra low emissions. The engine takes advantage of electronic engine management technology; it can run on any liquid fuel hence the name Omnivore.


The most interesting thing about this engine is that it has variable compression ratio(10:1to 40:1), it is achieved by a puck at the top of the cylinder which moves up and down thus affecting the volume/compression ratio of the engine. The Engine operates on a two stroke cycle and has homogeneous charge compression ignition (HCCI), As a result the engine does not require a spark plug just like a Diesel engine. Unlike 4 stroke where downsizing the engine increases its fuel efficiency here up sizing the engine improves fuel efficiency i.e. bigger the engine the better efficiency it has.The prototype engine is a 500cc single cylinder mono-block engine. For practical application Lotus plans on developing a multi cylinder engines and is in talks with other companies. It is quite promising and as a result of it simple construction it will be cheaper to manufacture and thus we’ll have cheaper and more efficient greener cars in the future. 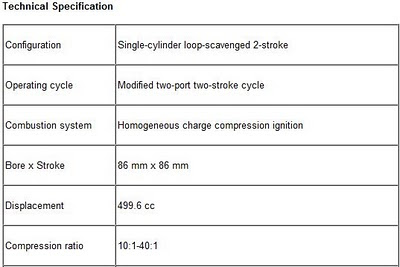