Technology as we know, has come a long way now. We have laptop computers which now even fit in our pockets. Smart phones which can do almost everything for you which you could never think of. We have 4G technology

which can provide you seamless ultra high speed wireless internet connectivity anywhere on the go. We have powerful and energy efficient processors which are smaller than your thumb nail. But surprisingly a lot has not been done to connect our virtual/Digital world with the real world, Like we still have the same old mouse and keyboard for interacting with our computer and now we have touch which is becoming more prevalent. But still our computers/devices still don't recognize the real word, your computer does not recognize the fact that a thumbs up means good and thumbs down means bad.
But now, An Indian guy by the name Pranav Mistry, Research Assistant and PhD candidate at the MIT Media Lab has come up with an ingenious solution to the problem.
The name:"Sixth Sense" 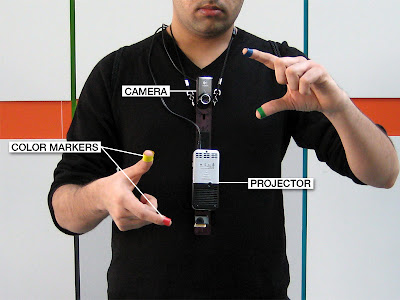 As such the device prototype comprises of a projector a mirror a camera and a pocket computer.The hardware is straight out of the shelf. The device is assembled like a pendent and is worn around the neck.The projector projects the screen/visuals on solid surface like a wall or your palm etc.

The camera on the other hand recognizes and traces hand gestures and movements.The pocket computer processes visual streams and information that comes in front of the camera. The color markers around the fingers help trace your gestures and the gesture tell the computer to perform the specific task.
The hardware is not that complex, what makes this prototype amazing is the application which runs on the pocket computer. Its just a prototype but still its amazing as to what all you can do. You can click a photo by making a frame gesture,you can make a phone call right from your palm. The gesture of making a circle on your wrist projects an analog watch. You can even get video feed right on the news paper,about the news you are reading. This is the best way to use the new feature by Google called the Google goggles,
Or visual search .Its like a replacement for every thing.

There are a few application like a drawing app. which lets you create drawing  with your fingers you can even use Google maps

. There are practically no limits to what you can do with it. Pranav says that, Successful innovation in technology is that which is cheap and can be easily available to the masses and so he did.

The prototype costs just $350 to build and once it is mass produced the cost will drastically fall down. The most important thing is the software that runs on the system and whats amazing is that Pranav plans to open source the software so it may be available free of cost and any one can develop application for it.
The future is very bright for this technology and it redefines the meaning of mobile computing and technology. We might probably be using this devices just like our mobile phones in the next five years from now.


I hope the Indian govt. recognizes this and help Pranav to propagate his technology.