Using The Microsoft Kinect in the DIY space is now becoming very popular. We almost come across something really innovative done by paring kinects up with other devices almost everyday. This time its a DIY 3D printer. A team/group with the name BlablabLAB posted a video showing people on the on the streets of La Rambla, Barcelona's iconic pedestrian street posing up in front of a setup/installation to create their own little model. The video was actually shot in earlier in January this year. 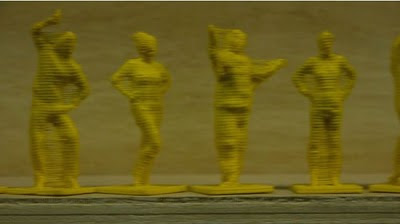 How it works?
The installation actually has 3 towers each fitted with a hacked kinect. The subject actually has to stand on a little podium in the center of the tower and pose. The kinects capture a 3D 360 degree view of the subject.The data is send down to a custom made software devoloped by using openFrameworks and openKinect, in order to produce a tunable full 360 degree point cloud. This is later processed by a software called Meshlab to produce a watertight mesh reconstruction (Poisson reconstruction).
The generated code can be sent to a CNC machine. In this case they used the RepRap, a very low-cost, low-resolution 3D printer. This printer prints out a little 3D model made of thermoplastic.

Check out this video.


Whats really interesting about this project is the fact that something like this can actually be done in public at a very low cost in almost real time and with of the shelf technology. Doing this would have been probably not possible only some 3-5 years ago at such low costs.

Source
Posted by Akib Pirzade at 9:36 AM