Cyclocopter Aircraft: Another way to hover and fly.

The human dream of flying has a long history, the aircraft designs we see today are the outcome of all the sacrifice and hardwork of a long list of inventors. On the contrary some designs never made it in the real world because of their complexities and lack of resources. One such aircraft design is the Cyclocopter also called a Cyclogyro. The original idea is know to be almost a century old. Basically, a cyclocopter is similar to a helicopter, it creates lift by means of rapidly moving airfoils. But unlike a helicopter, a cyclocopter's airfoils rotate about a horizontal axis, they continually changing their pitch in order to generate thrust in one single direction. 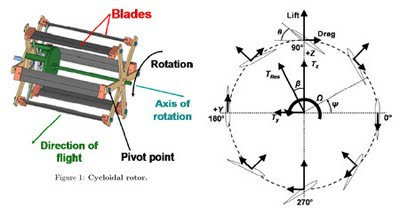 The idea is not as simple as it sounds and that's the reason no aircraft based on this system made it into real world applications. But that might change for good, a team of researchers at the University of Maryland from the Department of Aerospace Engineering have been working on this concept since 2008. It is a radically alternate concept to conventional helicopters. It can revolutionize vertical flight especially in the field of robotic Micro Air Vehicles (MAVs) which have a wide range of military and civilian applications.


The team behind the project is lead by Moble Benedict (Postdoctoral Research Associate) which includes Raghav Gupta (Undergraduate Research Asst) and Prof.Inderjit Chopra (Alfred Gessow Professor). They've been developing a cycloidal rotor system made of carbon fiber and titanium that's so far been used in both a quad cyclocopter and a twin cyclocopter.
The initial research states that horizontal axis propulsion concept appears to be aerodynamically more efficient than a conventional vertical axis rotor. What this means is that cyclocopter could turn out to be more efficient compared to the existing vertical rotor i.e. helicopter design. Another good feature of the design is the maneuverability it offers, due to the rapid change in thrust direction it gives.
The main problem for the concept to be practically possible is the complexity it has. But with the computing power we have these day, I don't think it is that difficult to make cyclocopter a practicable concept. The best way to find out is build a real concept, only time will tell.