This past month in June, Volkswagen; as a part of the 'HAVEit' project presented to the world the “Temporary Auto Pilot” (TAP) system, which allows the car to drive semi-autonomously up to a speed of 130 kilometres per hour on a motorways. The driver has to monitor the vehicle, this technology actually is a link between today’s driver assistance systems and the vision of fully automatic driving for the future.
Research project 'HAVEit' (Highly Automated Vehicles for Intelligent Transport) is basically an EU funded project aimed at increasing driving safety and boosting the European automotive industry in the international market. HAVEit, is a collaboration between 17 partners from the European automotive industry and scientific community.
. 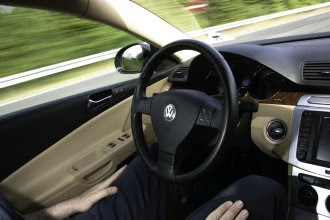 Although you might have heard a lot about autonomously driving cars in the past, what makes this project worth talking is that, unlike the other prototypes this system has been integrated into a production car, using production-level radar, camera, and ultrasonic sensors along with a laser scanner and an electronic horizon to make it work. What this means is that the system has been designed to be mass produced and to be completely integrated into any production car and it can be made available to the customer as a (say) optional extra in a car.


Remember, this is a only a 'semi-autonomous' system, the car cannot drive all by itself, not a substitute for the driver. It's mainly aimed to reduce the work of driving in like say monotonous driving situations, e.g. in traffic jams or on road that are exceedingly speed-limited. It also provides the added benefit of safety, it warns the driver with an audio alert if the driver losses concentration on the road. It also hits the brakes automatically if the the car gets dangerously close to a car or an object in front of it.

The other things this system can do is it can autonomously maintain the vehicle’s central position with respect to lane markers, it can maintain a safe distance from the car ahead of it by reducing speed. It also takes care of overtaking rules and speed limits. However, on the other hand just like exiting driver assist systems the driver can turn it off or override it. There is also the choice of the automation level like, assistance (with the hands on), autopilot (with the hands off) and safety (emergency brake).

Here is a video showing how the system works.

Source
Posted by Akib Pirzade at 12:36 AM