Ferrari Hybid to be unveiled at Geneva motor show 2010

Sports cars are the meanest automobiles but not the greenest, But that’s about to change. The hugely popular Italian sport car manufacturer, Ferrari is set to unveil a new Hybrid sports car for the first time at the Geneva Motor show in March.
There were report last year in June about Ferrari filing for a patent based on a new 4WD Hybrid propulsion technology at the European Patent office, at the time Ferrari confirmed about the hybrid technology and hinted a release within a year’s time. Seems like the time has come.
The car will be based on the popular Ferrari 599 GTB which debuted in the 2006. It will be a great step in sports car history.


The specs of the car have leaked some how. 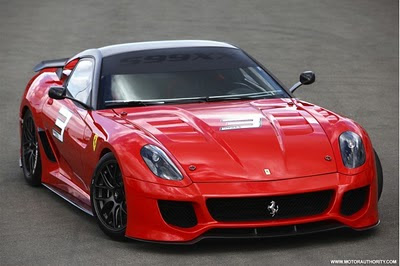 It will hover a 612 BHP V12 6.0 liter engine with KERS technology. The KERS system will capture the energy while braking and store it in Li-ion batteries. This energy will be used by the electric motors during acceleration and adding power when necessary. The engine will shut down while idling. This system is expected to bring about a 30% improvement in fuel economy i.e. from a 9 mpg to 14 mpg.
It will be an all wheel drive system.