Mosquitoes are a problem which people  all across the world have to deal with.
A staggering 250 million people around the world are affected by Malaria every year and 1 million people die due to it. Despite so many attempts to eradicate malaria all attempts have failed. Mosquitoes have troubled humans since human existence and have developed resistance from a lot of repellents we have used over years. The best way to stay away from mosquitoes have been the low tech simple nets. But in this high tech world that's not the way to solve such a problem. So now Intellectual Ventures Lab has come up with a great solution to the problem,


The Photonic fence.
The Photonic fence is a laser system that detects mosquitoes and shoots them down from a distance. Its designed/made out of inexpensive components present in laser printers, camcorders, Blu-ray disc writers and video game consoles which makes it even more cool. 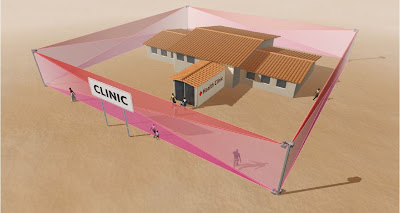 How it works?
The system creates a virtual fence made out of light called a “Photonic Fence.” by its inventors. LED lamps on each fence post  beams out infrared light at adjacent fence posts up to 100 feet (30 meters) away; the light would then hit strips of retroreflective material (similar to that used on highway signs) and bounce straight back toward the illuminator. A camera on each fence post monitors the reflected light for shadows cast by an insect flying through the vertical plane of light. Once an insect passes this virtual fence the software on the system detects it and shoots a non lethal laser straight at it, this lasers helps the system to get detail about  the insects  size, wing flapping rate etc. Such details help the system make difference between  mosquitoes, butterflies, and bumblebees, the best part is it can even determine whether a mosquito is male or female! To remind you only female mosquitoes bite humans. 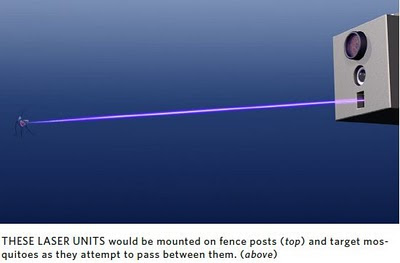 The system tracks the mosquitoes in flight, it makes sure its a valid target by running security checks. Once that's done, the system activates another powerful laser which burns the mosquito. The laser is not lethal for humans or other larger objects that may cross the fence.
The system is in a prototype stage so you cannot be a 100% sure. But once more engineering and development is put into it this may prove to be a novel solution. I cant wait to see such a system in the market soon!

For more info about this project follow the link
http://intellectualventureslab.com/?page_id=563