When it comes to mechanical design, we know from history that the simplest of designs turns out to be the most useful of all. That's what Quadrocopter or Quadrotors as they are called are proving once again. Quadrotors are basically flying crafts which have a cross chassis and have a motors at each of the four ends, all the electronics for control  is situated in the middle. With the option of high tech programmable circuits these days the tasks they can perform are only limited to the ability of a programmer and the sensor options available. 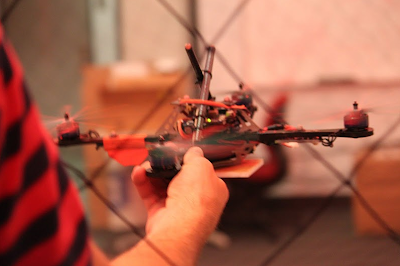 A team of engineers at the University of Pennsylvania's GRASP Lab (General Robotics, Automation, Sensing and Perception) have come up with algorithms which can make Quadrotors autonomously work and do an array of maneuvers and surveillance tasks. The Quadrotors have been earlier programmed to shown a wide variety of capabilities like autonomously correcting their orientation no matter however they are launched, capabilities of flying though hoops and narrow passages, autonomously attaching to a surface and surveillance tasks. Recently they have went a step ahead they now have grippers attached to their base. These Quadrotors robots have been programmed to pick up modular construction parts and fix them in arrangements which exhibit rudimentary construction structures. The construction ability is the latest offering. The project is  going on from a long time now. They can even be programmed and used to work together as a team to pick up larger objects.
The people behind this project are Lindsey, Daniel Mellinger, and Vijay Kumar at the GRASP Lab. The team uploads videos on YouTube on This channel.


What we learn from this project is the fact that Quadrotors can be used for a wide variety of applications, their maneuverability is just unmatched. Moreover, the platform is highly scalable. In the future we might see warning boards on construction sites which say.


Have a look at these amazing videos.