CompuLab an Israel based computer module boards and miniature computer system manufacturer announced a new energy efficient PC named Trim Slice. Its a miniature desktop computer powered by NVIDIA Tegra 2, the same processor thats powering the latest hi-end tablets and smart phones. Trim-Slice is said to be CompuLab’s smallest and most energy efficient computer. What makes this device unique is the fact that its a fairly small device almost looks like a small thin client in a sense. Don't go by the size it packs in quite a punch. 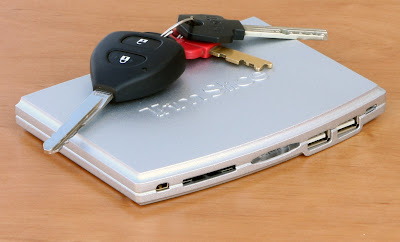 The Device runs on the NVIDIA Tegra 2 Dual Core ARM Cortex A9 1 GHz processor which has integrated ultra low power GeForce GPU. The dimensions are  5.1 x 3.7 x 0.6-inch (130 x 95 x 15mm) which is pretty small as you can imagine. The Trim Slice is said to offer rich multimedia capabilities and user experience similar to a full size PC at only a fraction of the power consumption which is said to be as low as 3-Watts, to my knowledge even lesser than what a cell phone charger consumes. How is thats possible?! All thanks to the fanless design, the NVIDIA Tegra 2 low power processor and SSD/flash drive for storage making the device motor-less and rugged. The device has 1GB DDR2 RAM, built in WiFi, Bluetooth, HDMI 1.3 full-HD + DVI (dual head), SD card slots, 4 USB 2.0 ports and a 64GB SSD (SATA) for storage. With so may I/O options available it can be used for a wide variety of computing needs with the added advantage of portability. 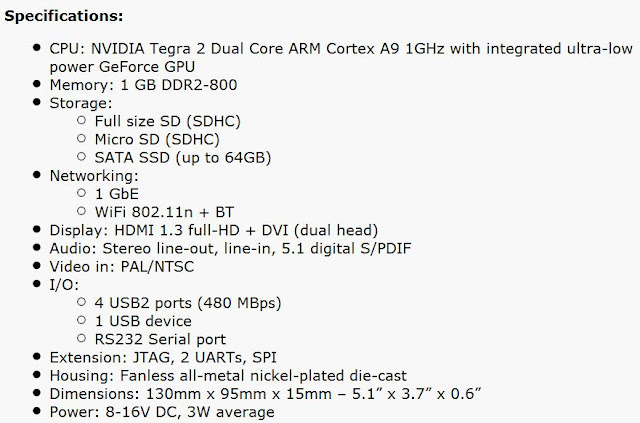 The device is expected to be available from April 2011. The exact price of the device is not yet confirmed. According to CompuLab, Trim Slice will also be open for OEM re-branding and will be available in several configurations. 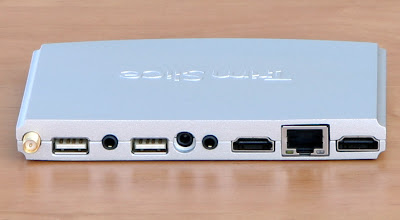