Nature has always been a great inspiration when it comes to designing and developing new mechanical devices.  With the advent of the UAV age, flying machines are getting smaller in size. When it comes to hovering UAVs like mini-scaled helicopters the problem with them is the smaller they get the less efficient they become. So to solve this problem Evan Ulrich and colleagues at the University of Maryland in College Park turned to the biological world for inspiration. Many trees disperse their seeds by releasing those single-winged seeds that are also called "Samara". Evan Ulrich and colleagues built a mechanical Samara also know as Ulrich flyer whose dynamics are very similar to those of nature's Samaras.


Samara takes advantage of what is called auto-rotation that allows them to spin through the air fly far away  and land to the ground without the need for an engine. That's what makes the design highly efficient. Evan Ulrich and his team was able to analyse the flight with high speed motion capture cameras and mimic the design to create a Mechanical Samara which could be controlled remotely.

The Samara continuously rotates about its axis which makes it a lot more difficult to control than a traditional helicopter. Ulrich found out that both natural and robotic Samara travel in a fixed circle whose radius is determined by the pitch of the wing. The only way to change directions or control it is by changing the size of the circle the vehicle is travelling in and pilot the aircraft to any desired destination.

How it works?
Now to explain all this in simple terms, its a single wing which has a pager motor attached to a propeller fixed on a strip of material perpendicular to the wing. 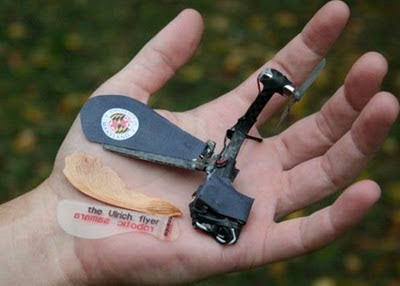 The propeller on the pager motor makes the wing spin about its central axis that give it the needed lift. The altitude can be simply controlled by changing the speed of the pager motor/propeller. The faster the pager motor runs the higher it goes. If the motor is turned off it stays for a while due to auto-rotation and starts to come down steadily just like a Samara would.
The team has build around a hundred experimental prototypes so the specifications are not like to the book. 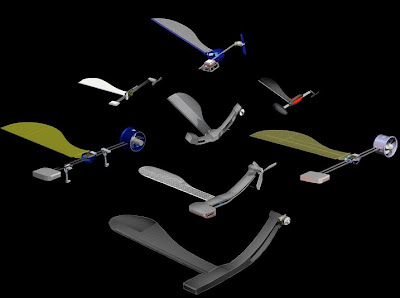 The concept of a single-wing rotating aircraft is not something new, in fact the first vehicle of this type flew in 1952 in New York by Charles W. McCutchen. A more recent air vehicle was developed and flown by a team led by Lockheed Martin Advanced Technology Laboratories. However the concept of auto-rotation has been incorporated for the first time.
The design has a potential application in the toy industry, remote surveillance and can also be used as a relatively cheaper alternative to satellites for mapping and weather forecasting. If they could find a way to make it fly on solar power it could just stay in the sky forever.