Air Hybrid vehicles a much better option for future hybrids?

Hybrid Engine technology is now almost available in all combinations, we have the popular Electric Hybrids,  Kinetic Hybrids (KERS), Hydraulic Hybrid and now we also have Pneumatic Hybrids. All Hybrids work in the same way i.e. they harness and store energy while braking and use it when needed, the difference is they use different methods to store that energy. Researchers from the University of Lund, Sweden in collaboration with a Swedish company Cargine are working on the development of Pneumatic hybrids for practical usage.

Urban traffic is slow and jerky, thats when hybrids prove to be beneficial. Constant acceleration and braking causes a great loss of energy. Electric Hybrids involve a lot of electronics and electrical component thus costs a lot and are heavy on maintenance, this has been a negative factor for electrical hybrid's popularity so far.
Sasa Trajkovic a doctoral student in Combustion Engines is the man behind the project, his calculations suggests that 48 percent of the brake energy, which is compressed and saved in a small air tank connected to the engine could be reused later. What this means is that the degree of reuse for air hybrids could match that of today’s electric hybrids. The major advantage of using a compressed air hybrid is that they are a lot cheaper to manufacture and lighter on maintenance.

How it works?
The Engine prototype was developed using a heavy duty Scania engine. With modifications in valves the engine is made to function like a compressor, during pneumatic hybrid operation the engine can be used as a 2-stroke compressor for generation of compressed air during vehicle deceleration (compressor mode) and during vehicle acceleration the engine can be operated as an air motor driven by the previously stored pressurized air (air-motor mode). The compressed air is stored in a pressure tank connected to one of the inlet ports. One of the engine inlet valves has been modified to work as a tank valve in order to control the pressurized air flow to and from the pressure tank. In order to switch between different modes of engine operation (Combustion to air-motor) there is a need for a fully variable valve actuation (FVVA) system. The engines used in this study were equipped with pneumatic valve actuators that use compressed air in order to drive the valves and the motion of the valves is controlled by a combination of electronics and hydraulics. 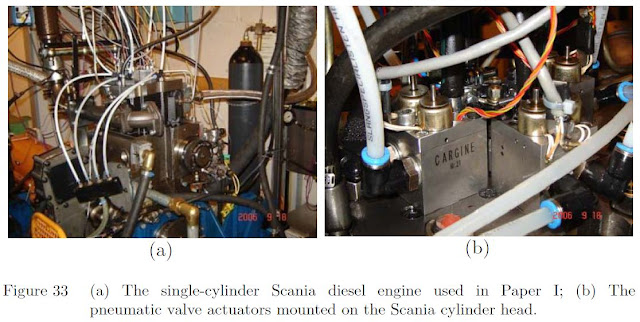 This research was done on a 4 cylinder and a 6 cylinder Scania engine but only one of their cylinder were modified and working thus making them single cylinder. Lund University researchers hope to conduct the research on muti-cylinder engines in the future. Although compressed air cars have been heard about for a long time but haven't caught up in the automotive industry yet, but this hybrid concept seems be a lot better than the others, considering the fact that it does away with heavy and costly batteries need in the electric hybrids, Heavy Flywheel needed in the KERS system and the complex hydraulics needed in the Hydraulic system. Its seems like a more cost effective and simple proposition considering that it could reduce fuel consumption by up-to 50% .
We can't say a lot about it as its still in its prototype stage.

“The technology is fully realistic. I was recently contacted by a vehicle manufacturer in India which wanted to start making air hybrids”, Sasa Trajkovic says.