Controlling interfaces and digital environment via mind control will probably play a huge  role in the future. How about driving your car by just thinking? Thats what researchers from Artificial Intelligence Group of the Freie Universität Berlin Germany have created. This research group works under AutoNOMOS Labs funded by German Ministry of Education and Research, has been developing innovative driving interfaces for cars with off the shelf components and devices. Earlier they developed a car that could be driven via an iPhone(iDriver), iPad and an eye-tracking device. 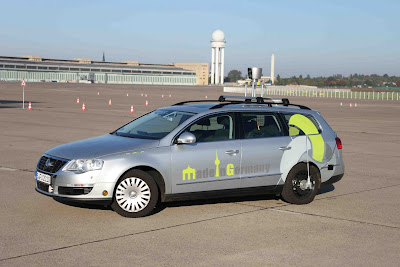 This time they developed a car that can be controlled by the power of thinking. To do this they used an off the shelf Emotiv "neuroheadset" (EPOC), which has become the most popular device of choice in the prototyping domain. It basically maps the electrical activity along the scalp produced by the firing of neurons within the brain when you think. It was originally developed for mind controlled gaming but its application are only limited to your imagination.
How it works?

The main essence of Brain Drive is the software developed by the team. Each action we think about produces a different pattern of electrical brain activity. This is recored in a training session between the user and the computer first hand. The software associates the patterns recored by the neuroheadset to specific commands like turn left, turn right, accelerate etc. These inputs are feed into the drive by wire system of a modified
autonomous Passat Variant 3c. All this creates a system where you can turn the steering or push the accelerator paddle and brake by just thinking about doing it.

Now of-course this is a prototype and is not road safe. The team tested it out on large open space at an air force base in Berlin. This projects consolidates the fact that human-machine interfaces like this have huge potential to improve driving, especially in combination with autonomous vehicles. We can have an autonomous cab ride, where the passenger could decide, only by thinking which route to take when more than one possibility exist.

Check out this video