A couple years ago we had a time when Mobiles phones were turning smaller and smaller, all of sudden with the advent of high end smart phone devices, tablet devices like iPad and especially the Android OS we have seen a considerable increase in the screen sizes in recent time and so we now have bigger phones like the Samsung Galaxy S, Motorola DROID X  and HTC EVO 4G. Forget phones we now have a Phone-Tablet Hybrid The Dell Streak. 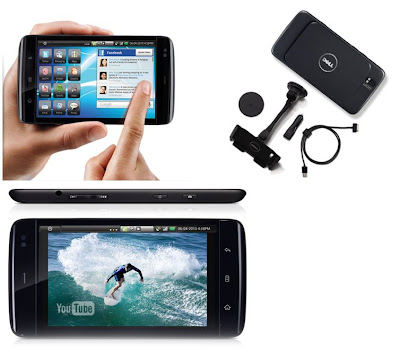 The Dell Streak is a device for the people who use their phone more for surfing the net, watching videos and other stuff like checking emails etc than they use it for attending calls, you don't want to be looking crazing taking on a phone which looks bigger than your head!
The phone has a large 5 inch capacitive touchscreen, has a screen resolution of 800 x 480 (WVGA) which is quite responsive and supports multi touch the screen is protected by high quality scratch-resistant Gorilla Glass which can stand rough usage (like for people who keep their keys and phone in the same pocket).
It features the Powerful 1GHz Qualcomm Snapdragon (QSD 8250), 512MB of Ram. This powerful hardware makes it really fast and multitasking a breeze. Its just 0.4 inch thick which makes it easier to handle.
The other key point is the device is designed to be held in a horizontal (landscape) position,which gives you full advantage to the large display unlike most of the mobile devices which are designed to be held in a vertical position. And of course it run on the Android OS so you have access to a ton of apps and other special features.
It has a good 5MP camera which has dual LED flash and Auto-Focus Camera plus a VGA camera in the front for video calling. Its got GPS navigation
More specs 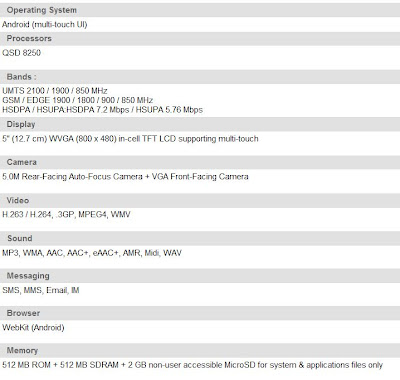 What Bad about Dell Streak

Well the major factor is the size, if you consider it as a phone.When you put it in your jeans/trouser pocket it quite visible. Its bigger than any other smart phone out there which offer the same feature except the larger display. Its only good if you wear business suites so you can put it in you coat pocket. The Device currently runs on the older Android 1.6v which make it inaccessible to newer android applications, Dell has promised a free upgrade to the latest android 2.1/2.2v for free later in the year. It has a non standard USB connector so you always have to carry the cable with you just in case you need it. It doesn't support multi touch in Google Maps. Dell hasn't  worked  on the UI much it doesn't take full advantage of the large display. The UI looks more like a stretched out version of the Android found on other devices. There are no details as to when it will be available in other countries.


Here is an un boxing review from Techno Buffalo