People who are bound to use a wheel chair face a lot of problem in their daily life. Seemingly simple tasks like getting over a side walk or climbing a couple of steps can be really difficult and almost impossible without someones assistance. That's about to change for good, a new bionic exoskeleton developed by a New Zealand based company Rex Bionics has taken bionics to another level. Exoskeletons aren't something new we have seen them in movies, they have been developed for military applications by big companies. But it wasn't until now that it was used for handicapped people. 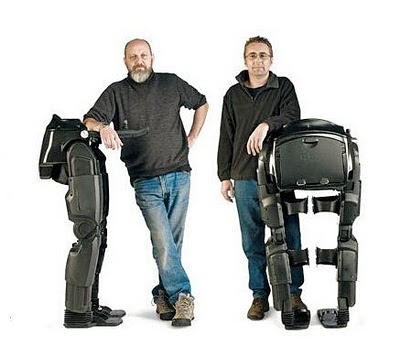 The whole concept came about to founders and high school friends Richard Little and Robert Irving, when Robert Irving received a diagnosis for Multiple Sclerosis, he realized that he would need a wheel chair one day. Both of them belong to Engineering backgrounds, so they undertook the task of developing a  realistic standing and walking alternative to wheelchairs. So after 7years of hard work they have come up with REX.


How Rex works
Rex is a strong Robotic Exoskeleton made from light weight materials which enables its users to stand up, walk, move sideways, turn around, go up and down steps as well as walk on flat hard surfaces including ramps and slopes. The users have to strap them self into these pair of robotics legs. The robotics legs weighs 38kgs. They are powered by custom made rechargeable battery designed for safety, long life and low weight. It is controlled via a joystick.

Limitations
The Rex is not for everyone the users has to fulfill certain requirements, the users should be between 1.46m (4ft 8in) and 1.95m (6ft 4in), with a weight less than 100kg (220lb) and a hip width of less than 380mm (15in). The customer also has to go through a series of medical tests to ensure their general health and suitability for using Rex. It is build to work on normal surfaces you cannot use it on soft, slipper surfaces on areas that contain debris or small objects, such as ice, snow, sand, grass, mud or gravel etc. Another limitation is the fact that it costs a lot, one of these will set you back US$150,000. Rex is currently available only in New Zealand. It will be available in more countries by 2011. It is quite slow in its movements as well.

Finally I would say its a great options for people who use wheel chair and have the money. It is in its early stage and  chances are there will be more such products that might soon hit the market, Robotics technology is evolving fast you never know!

Check out this Video where Hayden ( The first user) & Rex work together.