Robot that works on biomass eats and poos like an organism

Robots in general require batteries and have a limited run time this limits their ability to work autonomously. The only solution to this problem is to make use of available energy resources like solar energy, that too has its own limitations. But what if I say we already have Robots that create their energy by eating stuff and poo too.. Yeah you heard it right.
A team of researchers, professors and scientists from the Bristol Robotics Laboratory in the UK  have created what is called the EcoBot III (Eco-bot 3). The Eco-bot 3 is the latest version of robot which works by creating energy from biomass.Ecobot III, contains a fully functional digestive system capable of ingesting biomass, turning it into energy, and then excreting waste. Ecobot is also called "The  BREADbot" (Bio-Regulation and Energy-Autonomy with Digestion), the earlier version the EcoBot 1 and EcoBot 2 worked by relying on sugar and flies diet respectively.

How does EcoBot III work?
Ecobot III basically works by converting sewage (biomass) into energy with the help of what is called Microbial Fuel Cell technology (MFC). It is a kind of Fuel Cell which basically mimics real digestion. It makes use of complex chemical reactions which generate hydrogen, this hydrogen provides electrons to generate the electric current which powers the robot, while hydrogen ions are sent to a separate chamber where they mix with oxygen to create water. The robot is powered by a stack of 48 such Microbial Fuel Cell.
The robot excretes out the waste biomass  At the end of a complete cycle (approximately after 24 hours) a peristaltic pump evacuates the waste that has accumulated in the bottom of the conical artificial stomach. 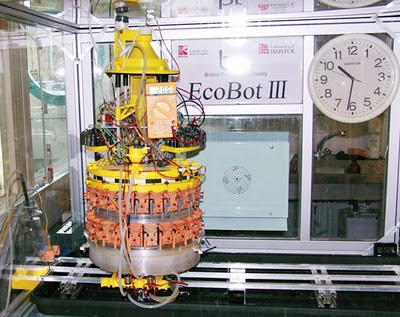 Now the prototype robot actually looks like a little tower and it run on steel rails. This is not something that is really fast, it only moves 21cm in like a day. It uses only 1% of the total energy available in the biomass . Its not efficient and of course of no practical application. It is carbon neutral (generates no CO2) though with further development definitely it can have unlimited application. US military's research agency DARPA clams to have already developed such a tactile robot which can move for 160km by burning 60kg of waste material, they plan to reveal in coming weeks.

It is not totally official yet. The scientific paper on this project will appear in the Alife-XII conference, to take place between the 19-23 of August 2010.