Toshiba and Intel recently announced the launch of a tablet PC  in Japan for elementary and junior high schools kids named CM1. The tablet is focused to foster ICT (Information and communication technologies) skill among kids. The CM1 came up due to The Ministry of Internal Affairs and Communications of Japan which set out a policy of providing digital textbooks for all elementary and junior high school students by 2015.

The CM1 tablet PC for educational use will be available in the beginning of August, 2010 in the Japanese market. The CM1 features Microsoft Windows 7 Professional an Intel Atom Processor N450 (1.66 GHz), 2GB of RAM, 10.1 inch, pressure-sensitive, LCD touch screen (1366x768) with Power-saving LED backlight, 160GB Hard Disk. The monitor rotates 180 degrees, It also features a stylus (pen input) so kids can even practice handwriting on it, a web cam, a slip-resistant rubber coating for use on school desktops. Its designed quite rugged so it can handle rough usage by kids. Toshiba has really designed it quite well it weighs about 1.8 kg. 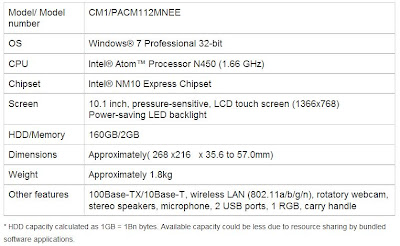 With devices like this at an early age Japanese kids will surely turn out to be smart people. The IT revolution has surely hit schools for good.